Description: Gamers spend ludicrous amounts of cash on the latest GPUs and displays to get more FPS (frames per second). Indeed, a recent study [1] shows that higher frame rates have a noticeable impact on how well the gamer will play, improving a player’s kill-to-death ratio by as much as 90%.

In online gaming, there are two basic approaches.

In a cloud gaming scenario, all clients run in the cloud on virtual machines. 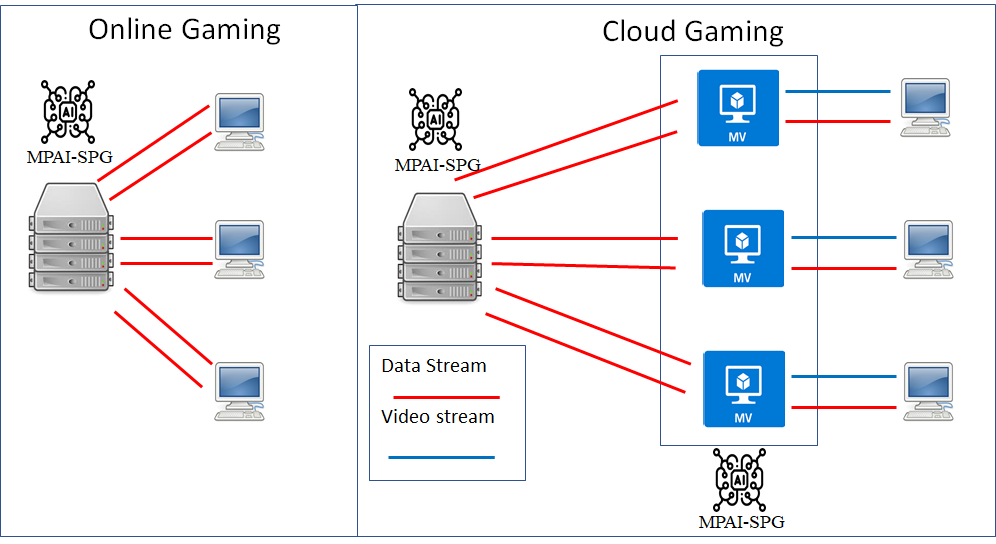 For example, in a first-person shooter game where a fast pace shooting takes place, player A aims their weapon at the position that player B held some milleconds in the past. Therefore, when Player A fires, player B is long gone. In order to remediate this, when the server gets the information regarding the shooting, which is precise becauses it carries timestamps, it knows exactly where player A’s the weapon was aiming at and the past position of player B. The server thus processes the shot at that past time, reconciles all the states and updates the clients. In spite of the belated reconciliation, however. the situation is not satisfactory because player B was shot in the past and, in the few milliseconds of differ­ence, player B may have taken cover.

An AI machine can collect data from multiple clients, perform a much better prediction of each move of each participant and perform sophisticated reconcil­iations. Information from the game engine – inputs from clients and reconciliation info – can be used in the video encoding process to improve the encoding (i.e. motion estimation), thus making possible encoding at higher frame rates for a high-quality gaming exper­ience even on low performing hardware.

An MPAI standard can accelerate adoption of AI technologies to improve server performance by creating a horizontal competitive market of AI components.

Here are two examples of known games that illustrate how MPAI standards can feasibility and user experience.

During an online racing game, players can see lagging reactions to their moves and an overall low-quality presentation because of network disruption. Usually the information on the screen predic­ted by a client is wrong if the online client information cannot reach the server and the clients involved in the online game on time. In a car racing game, the player may see at time t0 a vehicle going straight to the wall when it is reaching a curve. At time t1, after some seconds, the same vehicle is “teleported” to the actual position yielding an awful player experience.

AI can mitigate this issue, offering a better game experience to players. Data from the different online games are collected and used to predict a meaningful path or the correct behaviour in the time information does not reach the clients.

In some traditional online video games, specific information is displayed differently on different clients because it is too onerous to compute all the outcomes of players’ actions in a physically consistent way. An example is provided by a zombie game: the result of killing hordes of zombies in each client is visually different from client to client.

A server-based predictive input can support the online architecture and enable it to provide an equal outcome on all clients. In a massive multiplayer hack&slash game, the result of the different combats among players yields the same live visual online experience to each player.

The improvement of the quality of the overall experience can benefit all the events that involve e-Sports or equivalent environments and consolidate the technology for the market.

The potential of this use case can influence common online applications that orchestrate different inputs from different users.

Short term: improved UX on a large set of current games due to a more performing AI based architecture.