Use Cases and Functional Requirements

Moving Picture, Audio and Data Coding by Artificial Intelligence (MPAI) is an international association with the mission to develop AI-enabled data coding standards. Research has shown that data coding with AI-based technologies is more efficient than with existing technologies.

The MPAI approach at developing AI data coding standards is based on the definition of AI Modules (AIM) with standard interfaces. AIMs operate on input data and produce output data, both having a standard format. AIMs can be combined and executed in an MPAI-specified AI-Framework. The MPAI-AIF standard is curren­tly being developed after significant responses were received in response to a Call for MPAI-AIF Technologies [2] with associated Use Cases and Functional Requirements [1] issued on 2020/12/16.

By exposing standard interfaces, AIMs are able to operate in an MPAI AI Framework. However, their performance may differ depending on the technologies used to implement them. Therefore, MPAI believes that competing developers striving to provide more performing proprietary still inter­operable AIMs will naturally create horizontal markets of AI solutions that build on and further promote AI innovation.

This document contains a Use Case and the corresponding Functional Requirements for the MPAI Server-based Predictive Multiplayer Gaming (MPAI-SPG) application area. The purpose of this Use Case is to minimise the audio-visual and gameplay discontinuities caused by high latency or packet losses during an online real-time game.

The current Use Case will be the target of Calls for Technologies. In the future MPAI may extend this Use Case of develop new ones falling in the scope of MPAI-SPG.

This document is structured in 7 chapters, including this Introduction.

Table 1 identifies and defines the terms used in the MPAI-CAE context.

Most MPAI applications considered so far can be implemented as a set of AIMs – AI, ML and even traditional DP-based units – with standard interfaces assembled in suitable topol­ogies to achieve the specific goal of an application and executed in the MPAI-defined AI Frame­work. MPAI is making all efforts to identify processing modules that are re-usable and upgradable without necessarily changing the inside logic. MPAI plans on completing the development of a 1st generation MPAI-AIF AI Framework in July 2021.

The MPAI-AIF Architecture is given by Figure 1.

MPAI-AIF is made up of 6 Components:

A proper explanation of this Use Case requires an identification of the main components involved. This will be done following the evolution of gaming from offline to online to cloud gaming.

A model of an off-line gaming is represented in Figure 2. 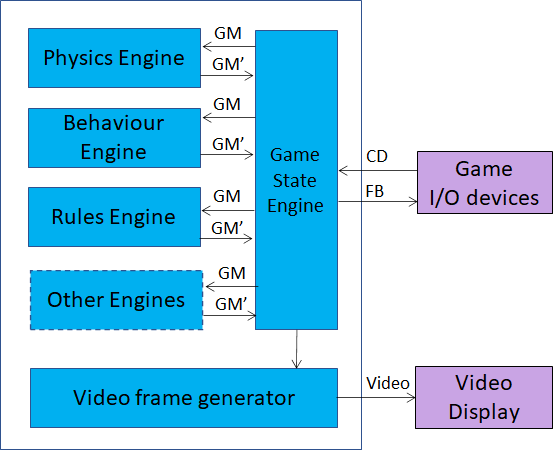 The following describes the off-line game machine operation based on Figure 2:

In online gaming, some of the functions carried out by an offline game machine are split between client and server. 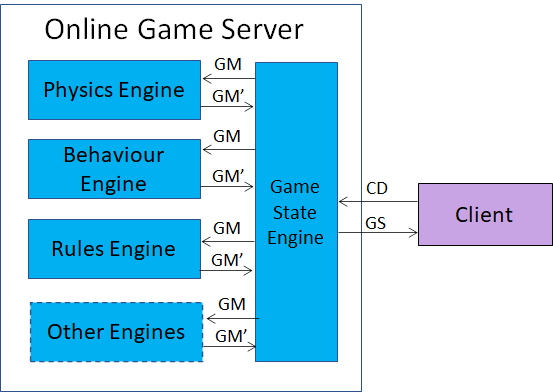 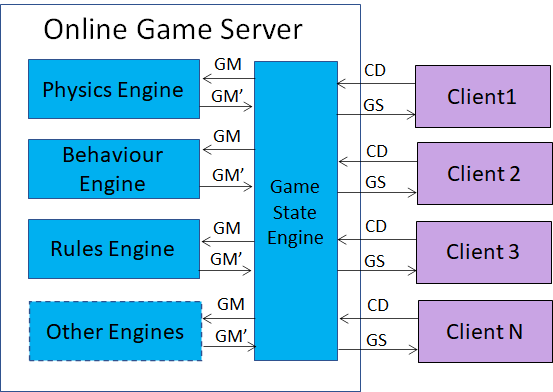 In cloud gaming, the original functions of the offline Client are further split among the Thin Client, the Virtual Client and the Server.

The Functional Requirements developed here adhere to the following guidelines:

The MPAI-SPG solution is depicted in Figure 7, applicable to cloud gaming and online gaming as well. In the following “Client” will be used to indicate both Virtual Clients and Clients.

The MPAI-SPG subsystem operates as follows

In normal conditions, GSp should be close to GS.

Figure 7 is the reference model of MPAI-SPG. 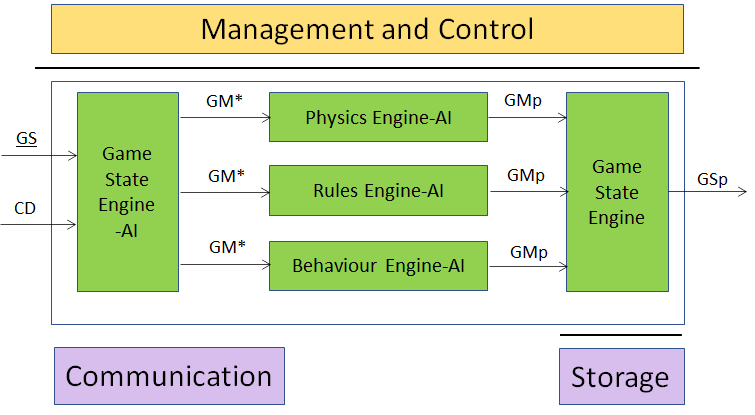 The AI Modules perform the functions described in Table 3.

The I/O data are given in Table 4.

There are two types of game messages. The fist concerns the operation applied to the data and the second the state