MPAI likes to call itself as “The international, unaffiliated, no-profit organisation developing standards for AI-based data coding with clear Intellectual Property Rights licensing frameworks”.
Standards development is certainly not an MPAI invention, but its standard development process, based on decades of experience, makes MPAI unique with its openness to society and its fixing of known deficiencies.
Anybody can make proposals for an MPAI standards. If one is made, an effort starts to evaluate the merit of the proposal and get the involvement of other interested parties – members and non-members. A recent example is Neural Network Watermarking (https://mpai.community/the-mpai-neural-network-watermarking-nnw-project/). MPAI calls this stage “Interest Collection”.
Setting aside the case of a member making a proposal and requesting it to be treated confidentially inside MPAI, use cases where the proposed standard can be used are developed with participation of interested parties (“Use Cases” stage).
Once the use cases are identified, the functional requirements generated by the use cases are elaborated during the “Functional Requirements” stage. Once the functional requirements are approved, participation of non-members is no longer allowed, because future users of the standard should be allowed to express their needs in terms of functional requirements, but only members should have a say once we get into the stages of technology development. Of course, MPAI welcomes qualified MPAI membership applications at any time
The next stage mirrors what happens in the real world. A buyer expresses its needs in terms of what the goods should do (functional requirements),  and  the terms and conditions for acquiring it  (commercial requirements). See below how the “Commercial Requirements” stage is implemented in MPAI.
As soon as both functional and commercial requirements are known, MPAI enters the “Call for Technologies” stage. The call includes functional and commercial requirements.
Anybody may respond to a Call for Technologies. A non-member response, however, is accepted, however, only if the responder becomes a member. As a result of this process, MPAI can enter the “Standards Development” stage.
When the draft standard is mature, it is made public opening it to comments. MPAI calls this stage “Community Comments”.
MPAI examines the comments received and may decide to change the draft as suggested. When the draft is final, it is submitted to the General Assembly for approval in the “MPAI Standard” stage.
The figure depicts the stages with the corresponding levels of participation.

Many of those involved in standards development are aware of the delicate role that standards play vis-à-vis industry and consumers in enabling interoperability. Some are also aware of the fact that SDOs developing high-technology standards become a conduit for innovation feeding technical standards.

Innovation, however, often protect their innovation through patents and a standard with many innovations may end up not being easily exploitable.
The industry is now aware of the perverse result of standards not promoting but hampering use of innovation. While others make no action, Article 3 of the MPAI Statutes read: MPAI is a not-for-profit organisation … with the mission to promote the efficient use of Data by… bridging the gap between Technical Specifications and their practical use through the development of Intellectual Property Rights Guidelines (“IPR Guidelines”), such as Framework Licences and other instruments.

This is how MPAI has implemented the principles of the Statutes:

The process as articulated above responds to two basic requirements of a “goods delivery agreement”: when will the licence be available and at what price. Sure, this is not the precise answer one would like it to get, but antitrust legislation does not allow the process to be more precise.
MPAI has already developed 5 standards and for two of them – Multimodal Conversation (MPAI-MMC) and Context-based Audio Enhancement (MPAI-CAE) – identified patent holders  are moving toward the selection of their preferred patent pool administrator. At the two links above, you can read the FWLs of the two standards.

The approach of the AI industry to AI standards is very similar to the approach of the IT industry some 60 years ago: virtually no official standard and, if anything is “standard”, it is the internal result made public by a major player
MPAI has developed its own approach to AI-based data coding standardisation targeting components and interfaces adapted to the AI-based data coding context. 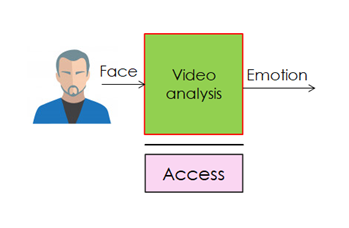 Figure 2 – An example of AI Module

The component – which MPAI calls AI Module (AIM) –depicted in Figure 2,  is defined by its function, the syntax and semantics of the input and output data (“Face” and “Emotion”, respectively) but not by the AIM internals. Access represents a knowledge base, typically needed by data processing based implementations, corresponding to the internal knowledge of AI-based implementations.
A full-fledged AI system typically needs several interconnected components that MPAI calls AI Workflow (AIM), as depicted in Figure 3.

Figure 3 – An example of AI Workflow

Figure 4 – An example of AI Framework

Standards specify interoperability points and MPAI defines Interoperability as the ability to replace an AIW/AIM with a functionally equivalent AIW/AIM.
MPAI standards give rise to an ecosystem whose elements are: MPAI, its standards, implementers and Consumers. The ecosystem can achieve its goal, i.e., interoperability, only if it operates under proper governance.
The Governance of the MPAI Ecosystem (MPAI-GME) standard introduces two more ecosystem players: Performance Assessors, for-profit entities appointed by MPAI to assess performance, i.e., the Reliability, Robustness, Replicability and Fairness of implementations; and the MPAI Store, a not-for-profit commercial entity tasked to verifying security, testing conformance, collecting the results of performance assessment, and guaranteeing high availability of implementations to Consumers.
The MPAI Ecosystem is depicted in Figure 5