MPAI has completed the identification of the functional requirements of the technologies needed to support new Use Cases in three standards:

MPAI targets the next General Assembly to be held on the 19th of July, the 2nd anniversary of the launch of the MPAI idea, to publish the three corresponding Calls for Technologies.

MPAI will hold four online events to present and discuss the Use Cases and Functional Requirements on the following dates:

MPAI Principal Members are now developing the Framework Licences for the three standards. The Framework Licences are licences without critical data such as cost, dates, rates etc., and have been devised by MPAI to facilitate the practical availability of approved standards (see here for an example).

Responses to the Calls for Technologies are expected to be received by the 10th of October 2022.

MPAI application standards are implemented as aggregations of AI Modules (AIM) called AI Workflows (AIW) and are executed in the MPAI-specified AI Framework (AIF).
Version 1 of the AI Framework (MPAI-AIF) standard specifies the AIF architecture, the AIF, AIW and AIM metadata that describe their capabilities, and the APIs. An open-source MPAI-AIF implementation is now available.
AI Framework (MPAI-AIF) Version 2 intends to provide the AIF components with the ability to call the security APIs of Figure 1 such as attestation service and secure storage service. MPAI-AIF V2 will help implementers to develop applications that meet their specific security requirements. 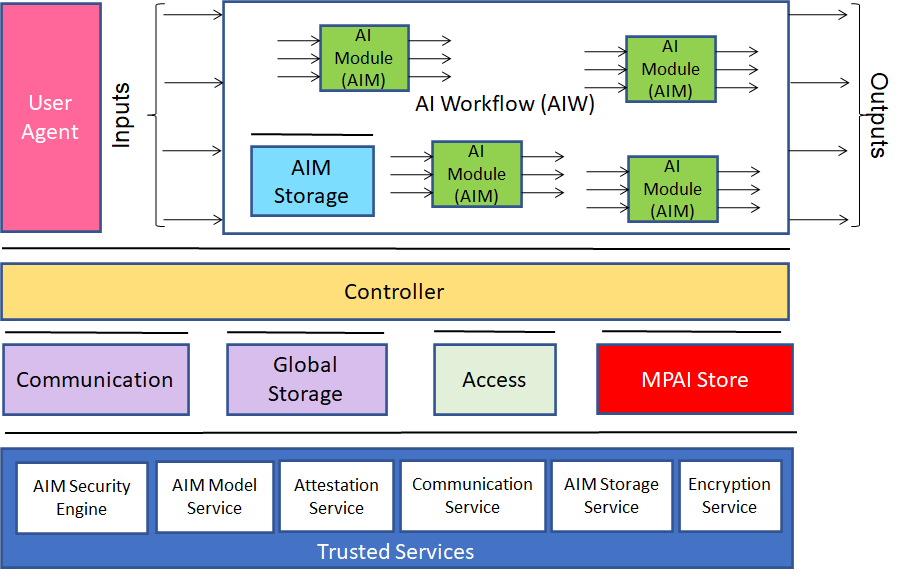 Those interested in the MPAI-AIF V2 Call for Technologies, can register to attend the online meeting on 11 July at 15 UTC. The event will offer an opportunity for those attending to discuss the identified functional requirements with MPAI. MPAI wishes to receive as many responses as possible so that a robust MPAI-AIF standard can be developed.
In the meantime, please review MPAI-AIF V2 Use Cases and Functional Requirements  and visit the MPAI-AIF website for an introduction.

The technologies specified by Multimodal Conversation standard MPAI-MMC V1 enable 5 important use cases: 1) Conversation with Emotion where a user converses with a machine able to extract the emotion of the human conveyed by their speech and face, and to display itself as a face-only avatar with emotion; 2) Multimodal Question-Answering, where a human asks questions about an object held in their hand to a machine manifesting itself as a synthetic voice; and 3) Automatic Speech Translation use cases where a machine translates the speech in one language to speech in specified languages that preserve the speech features of the speaker.
With Multimodal Conversation (MPAI-MMC) V2, MPAI substantially enlarges its technology repository to support 5 new ambitious use cases. 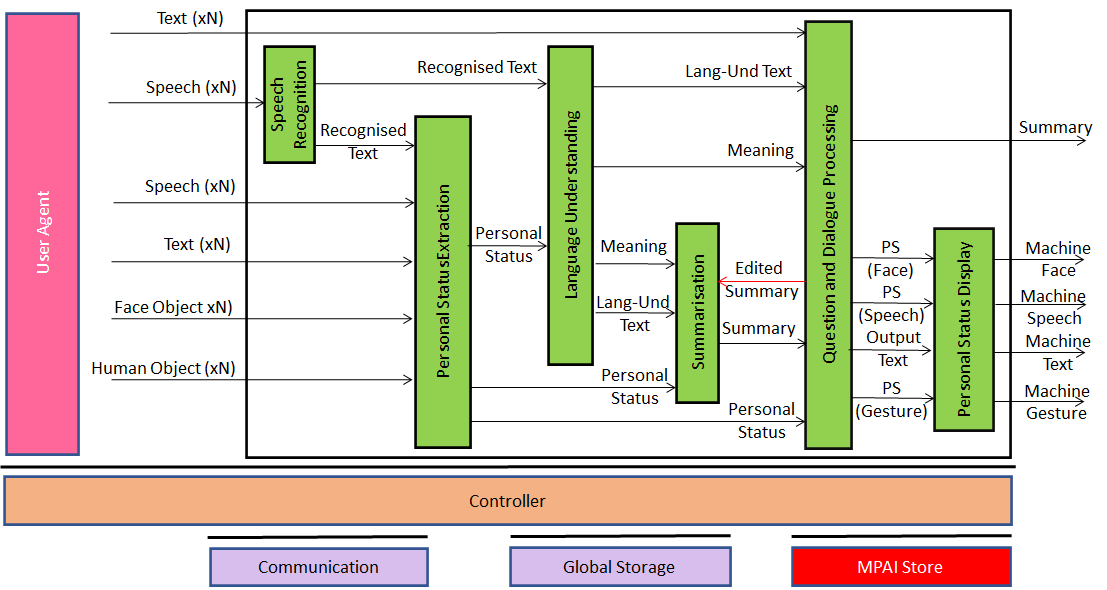 Two sessions are dedicated to MPAI-MMC because of the number of the use cases and the scope of the supporting technologies.

The event will offer an opportunity for those attending to discuss the identified functional requirements with MPAI. MPAI wishes to receive as many responses as possible so that a robust MPAI-MMC standard can be developed.

In the meantime, please review MPAI-MMC V2 Use Cases and Functional Requirements and visit the MPAI-MMC website for an introduction.

Digital watermarking indicates a class of technologies that can be used to insert a data payload into other data for a variety of purposes, such as to identify the data or its ownership. Watermarking can be applied to neural networks for similar purposes.

Of course, the measurement shall be done for a specific size of the watermark payload.

Figure 3 depicts the scope of the MPAI-NNW standard.

Figure 3 – The problem addressed by MPAI-NNW

Those interested in the MPAI-NNW Call for Technologies, can register to attend the online meeting on 11 July at 15 UTC. The event will offer an opportunity for those attending to discuss the identified functional requirements with MPAI. MPAI wishes to receive as many responses as possible so that a robust MPAI-NNW standard can be developed.

In the meantime, please review MPAI-NNW Use Cases and Functional Requirements and visit the MPAI-NNW website for an introduction.

We are keen to hear from you, so don’t hesitate to give us your feedback