A renewed life for the patent system

Patents have been the engine of progress over the last few centuries since the time when the Republic of Venice (1474) – the first in Europe – adopted a patent law. The history of media in the 19th century is studded by a multitude of patents filed by the many fascinated by the prospect of conceiving – and patenting – a technology that would enable media’s capture, storage, editing, transmission, and presentation. Then, in the first half of the 20th century, television captured a lot of attention, and, in the second half, consumer electronics became the rage.

The patent business model was typically based on an invention by a company, say, PAL by Telefunken or VHS by JVC, that succeeded on the market and was then licenced to competitors, the originating company enjoying a steady flow of royalties. The conversion of the company specification to a national or an international standards body was mostly a bureaucratic process.

The appearance of MPEG overturned that process. The new – digital – family of consumer electronics standards was produced by a committee that assembled technologies from multiple sources, hence embedding multiple patents. Patent pools that had gone out of fashion were revived and the patent pool administrator became the equivalent of the old “company with a successful patented product”, the only difference being that the administrator allocated revenues to patent holders. For all practical purposes, however, the business model remained unchanged. Consumer electronics companies still remember the MPEG-1 and MPEG-2 time as the golden age of digital media standards.

MPEG-4 was no longer just a consumer electronics standard, as mobile telcos and IT companies started playing a role. Luckily, the patent-holder grouping model survived to the benefit of efficiency in licensing patented technologies. It was no longer a golden age, but a bronze age (in terms of revenues). Companies, however, knew that there was a standard, that there was a licence, and that there was a patent pool administrator to talk to.

Therefore, patent pooling is still a good solution to give access to a standardised technology, especially in the case where a patent pool is really a one-shop-stop, that is, by taking a license from the pool, the implementer has a licence for all the SEPs (Standard Essential Patent) that cover such technology.

The last and current decade has become the “iron age” of patents with matters drifting away from past practice. There are multiple patent pools for standards, some of which offer an incomplete and incompatible set of licences. Some standards have a single patent pool administrator, but the licence is only published years after the standard is approved. Often, at that moment, there is a new generation of technologies doing a better job than the standard for which the licence terms have finally been published.

Thus, digital media standards are returning to a state comparable with the VHS-Betamax saga. As official standards are becoming practically “inaccessible”, different standards with different business models are popping up.

A strong motivation for creating MPAI has been the belief that standard are important; a healthy provisioning of good patents makes good standards; standards must be usable or they stop being enablers of progress in the market and carriers of innovation to consumers; and good patents must be remunerated. Without a fair return of their R&D efforts innovators would stop innovating.

The solution envisaged by MPAI is best illustrated by Figure 27 where the provider-customer relationship in the real world is compared with the relationship in the standards bodies requesting submitters of technical contributions to provide an FRAND (Fair, Reasonable and Non-Discriminatory) patent declaration regarding the licensing of their patents.

In the real world of product business, such as for car sellers, the supplier is committed to delivering goods that meet technical specifications on agreed commercial terms which include price and time of delivery. In the world of intangible matter, such as patent rights, with the FRAND approach, the commercial terms are simply glossed over. A company relying on a FRAND standard knows the functional requirements but not the commercial requirements, much less when the standard will become practically usable.

In the MPAI approach, those responding to a Call for Technologies know both the functional and commercial requirements with a provision that anti-trust legislation does not allow MPAI to provide the real-word equivalent of the “price”. However, the “customers” of the standard have a reference level (“the total cost is in line with the costs of similar technologies”). MPAI cannot give its “customers” a firm delivery date of the licence of the technology, but users know that the licence shall not come after the time products are on the market. 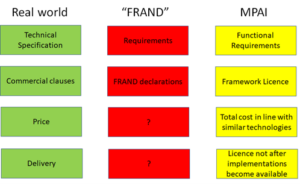 The distinctive difference between the FRAND system and MPAI is the Framework Licence (FWL). This can be described as the IPR holders’ business model used to monetise their IP in a standard without values: $, %, dates etc.

Here is the life cycle of MPAI standards:

More information on the differences between FRAND and FWL systems can be found in [32].

MPAI believes that patents are the engine of progress and an asset for humankind. The patent system should be saved, in the interest of industry, consumers and innovation.